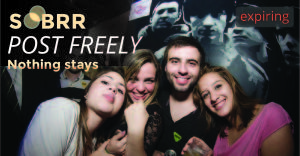 Sober Life in the Moment

College Women Switching to Sobrr as the Best App for Fun and Finding Soul Mates.

Co-eds are partying with hot mobile app Sobrr this Halloween. Perfect for club, concert, bar, or sports gatherings, Sobrr takes the scary out of social, enabling no-regrets, spontaneous interactions that expire within 24 hours — unless both parties agree they’re a match.

Having attracted 30k new users in just two months, fandom across U.S. campuses is growing, and Sobrr is rewarding the enthusiasm with All Hallows parties at UC Berkeley, University of Florida, University of Miami, University of Illinois, Lehigh University and UCLA (full schedule below). In addition, dozens of schools continue to register for Sobrr’s Campus Race Program, which continues through December.

CEO Bruce Yang developed Sobrr after a bachelor party weekend in Vegas, and the initial media buzz attracted a predominantly male following. But now, an increasing number of women are embracing Sobrr’s combination of fun, spontaneity and privacy. Yang says: “Women are telling us they have become “tired of creeps on the dating apps.” Our 24-hour friendship feature enables users to connect with people around them — and then to curate those relationships, distinguishing between fleeting acquaintances and those with true friend potential.”

Rave reviews for the app include: “Genius.” “Tinder + Facebook = Sobrr! What could possibly go wrong?” and, “I love this app! Finally, privacy when we post!!! Great job guys!!! And I found my soulmate!” (iOS app reviewers).

Originally available for iOS, growth is now set to accelerate significantly with last week’s release of Sobrr for Android. In support of the new growth, Sobrr recently secured a $1.1 million round of funding from IDG Ventures.

About Sobrr
Available for iOS and Android, Sobrr is the first app to introduce the concept of 24-hour friendship. In real life, people socialize, but only become friends with whom they like. Sobrr returns this control back to the user. Everything on Sobrr expires in 24 hours, including photos, messages, and, even, friends (unless you really, really like them).

Founded in 2014, Sobrr Inc. is a team of Silicon Valley veterans and UC Berkeley students and alumni lead by Co-Founders Bruce Yang, formerly of LinkedIn and Fitbit, and former Microsoft employee Vivian Xu.Sobrr was recently awarded “Most Innovative App” by the Silicon Valley Technology Innovation and Entrepreneurs Forum.