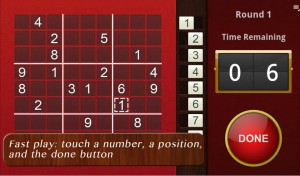 Revolutionary tablet app SudokuPDQ™ has taken a popular game enjoyed by hundreds of millions of people internationally and turned it into an ultra fast-paced, high-stakes, competitive game that can be played against multiple opponents in different locations. Newly launched and the first of its kind, SudokuPDQ transforms a solitary, global gaming phenomenon into an ultra-social, skill-based adrenaline rush for iPad and Android™ tablet users.

SudokuPDQ – the “PDQ” standing for “Pretty Darn Quick” – is a race against the clock to solve one square of a traditional 9×9 sudoku grid in the fastest time possible. Each game consists of five 20-second speed rounds, with a brand new, challenging puzzle presented for each round.

App creator and TV writer/producer Bill Biggar designed the game to feel at home in a casino environment. “I almost called the game ‘Su-doker,’ since SudokuPDQ is essentially a mash-up of sudoku and high-stakes poker.”

“We’ve created an environment for Sudoku enthusiasts to stoke their competitive fire,” Biggar said. “We find that people can’t put the game down because the competition sparks such fierce rivalries. Play it and you’ll see that it doesn’t get easier, you just get better.”

Yet Biggar says the game is not just for Sudoku players. “Some of the better players in our focus groups don’t consider themselves to be numbers people, and have never folded a newspaper in four to sit down and fill in an entire puzzle.”

SudokuPDQ brings people together to compete and play with players around the world. For those interested in an individual experience or who want to hone their skills, SudokuPDQ also includes a solo mode that tracks high scores and allows users to play against the clock.

SudokuPDQ™ is available now as a free app for iPad on the App Store, or for 10” or larger Android tablets on Google Play.

SudokuPDQ™, LLC is a trademark and patent pending social gaming company incorporated in the State of Kansas. It was created by award-winning former TV executive and syndicated newspaper game developer Bill Biggar. Its principals include a retired Fortune 500 Chairman and CEO; a former multinational oil executive; an entrepreneurial web-designer and online and mobile technology marketing executive; and a lawyer and former senior level Capitol Hill staffer with extensive relationships in the gaming industry.

iPad, iPhone, and iPod touch are trademarks of Apple Inc., registered in the U.S. and other countries. App Store is a service mark of Apple Inc. Android is a trademark of Google Inc. Other company and product names may be trademarks of their respective owners.