Two years ago, Apple changed the way its app store ratings worked by allowing developers to decide whether or not their ratings would be reset with their latest app update — a feature that Apple suggests should be used sparingly. Today, Google announced it’s making a change to how its Play Store app ratings work, too. But instead of giving developers the choice of when ratings will reset, it will begin to weight app ratings to favor those from more recent releases.

“You told us you wanted a rating based on what your app is today, not what it was years ago, and we agree,” said Milena Nikolic, an engineering director leading Google Play Console, who detailed the changes at the Google I/O Developer conference today.

She explained that, soon, the average rating calculation for apps will be updated for all Android apps on Google Play. Instead of a lifetime cumulative value, the app’s average rating will be recalculated to “give more weight” to the most recent users’ ratings. 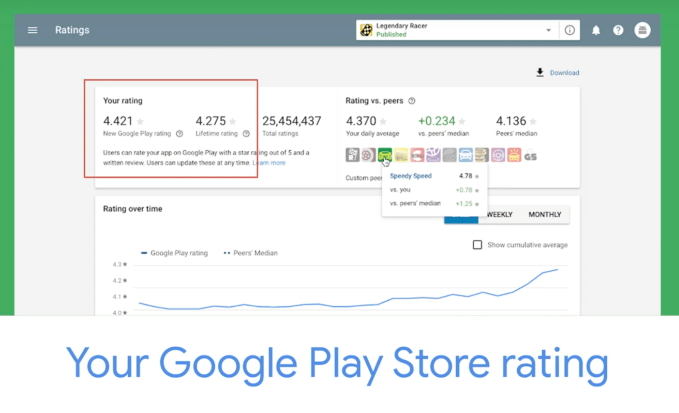 With this update, users will be able to better see, at a glance, the current state of the app — meaning, any fixes and changes that made it a better experience over the years will now be taken into account when determining the rating.

“It will better reflect all your hard work and improvements,” touted Nikolic, of the updated ratings.

On the flip side, however, this change also means that once high-quality apps that have since failed to release new updates and bug fixes will now have a rating that reflects their current state of decline.

It’s unclear how much the change will more broadly impact Google Play Store SEO, where today app search results are returned based on a combination of factors, including app names, descriptions, keywords, downloads, reviews and ratings, among other factors.

The updated app ratings was one of numerous Google Play changes announced today, along with the public launch of dynamic delivery features, new APIs, refreshed Google Play Console data, custom listings and even “suggested replies” — like those found in Gmail, but for responding to Play Store user reviews.

End users of the Google Play Store won’t see the new, recalculated rating until August, but developers can preview their new rating today in their Play Store Console.