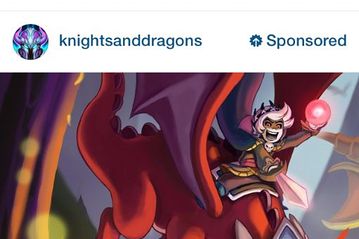 When you think of Instagram, you probably think of gaming.

Ok, perhaps not, but mobile gaming companies–which are among the most aggressive advertisers in mobile and social media–are quietly starting to embrace Instagram.

Traditionally known as a platform for fashion advertisers like Michael Kors and Burberry, Instagram opened its ad platform to more brands over the summer, including global advertisers last month. Among the new advertisers to join the photo-sharing social network are mobile game developers like Supercell, Gree, CrowdStar and Kabam.

These companies–skilled in enticing mobile app users to download addictive games to their phones–are having to tweak their more overt “play now!” messaging in order to fit in with Instagram’s unique aesthetic and user base. 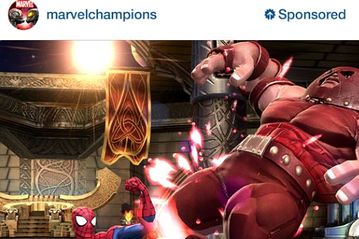 Take Pocket Gems, which makes games like “Episode” and “War Dragons.” According to Aland Failde, director of product marketing, the company has long been a big advertiser on Facebook, and is “very performance-driven,” he said.

That’s true for most mobile gaming companies, who are known for being heavily data-driven both in their design and their ad strategy. They are not after brand building so much as hooking ‘whales,’ or players who will download games for free but end up spending lots of money in the games on extra lives, game options and access to special levels.

As such, mobile games are often known for being flashy–if not altogether garish–less the kind of images that might look appealing next to a warmly lit shot of an organic brunch.

But while Facebook has a history of being a place people play social games, “Instagram is fundamentally different,” said Mr. Failde. “People are there to consume content. And everyone on the platform is fundamentally a content creator. You have to come at if from a different angle.”

That means stepping up your creative game, said Mr. Failde. Instagram has historically been picky about the quality of its ads, particularly before it opened its business up to the masses. When Mr. Failde’s team started considering running Instagram ads in July, Instagram supplied Pocket Gems with “one of the biggest ad guidebooks I’ve ever seen,” he said.

So far though, Instagram is performing well for Pocket Gems, he said. “We’re definitely seeing positive return,” he said. One key learning to date: rather than pushing the competitive gaming aspects on prospective users, Pocket Gems found more success showcase a character kissing a prince in an ad. 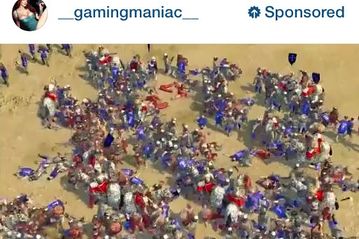 One major factor in Instagram’s favor is that, because it’s part of Facebook, advertisers have access to the same back-end ad technology systems and targeting tools they use on Facebook, explained Shawn Conly, vice president of marketing at Gree, which has advertised the game “Knights and Dragons” on Instagram. It also doesn’t hurt that Instagram is still relatively uncharted territory for game advertisers, who perhaps are benefiting from a novelty factor.

In fact, during a recent heavy ad blitz on Instagram on Sept. 26, Gree was able to deliver 12.6 million ad impressions in 28 hours, he said. 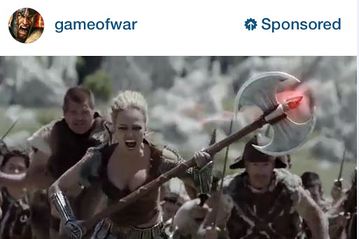 It’s too early to know whether Instagram can become the same kind of fertile field for app installations that Facebook is – so fertile thatthe importance of this ad category has come up on Facebook’s earnings calls. But the opportunity is large. Business Insider Intelligence estimates that the mobile app-install ad market in the U.S. will exceed $4.6 billion this year and jump to $6.8 billion by the end of 2019. Those figures include all mobile apps, not just games.

Of course, while it remains to be seen how receptive Instagram’s visuals-obsessed audience is to downloading apps like Supercell’s war-themed “Boom Beach,” some games may be tailor-made for the photo-sharing platform. Blair Ethington, senior vice president and general manager at CrowdStar, said the company has enjoyed early success advertising the game “Covet Fashion,” which lets players virtually shop for real life brands.

“If you look at Instagram, the platform works really well for fashion, and it’s a destination for our audience already,” she said.

Over the past two months, Crowdstar’s been achieving lower cost-per-install rates on Instagram than Facebook, she said, where she estimates mobile game advertisers can end up paying anywhere between $4 and $12 each time someone installs these games on their phone after seeing an ad. 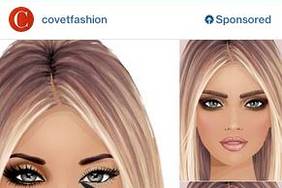 She agreed that Instagram requires a more deft creative touch, and that pushing game play was probably not the right approach. So Covet Fashion ads focus on visuals of outfits and eye-makeup. Her team has also been experimenting with using hashtags in its Instagram ads, such as #OOTD, or “outfit of the day.”

Write to Mike Shields at mike.shields@wsj.com